For information regarding COVID-19 in South Africa, please visit https://www.sacoronavirus.co.za

At the moment we are piloting a project for one of the Hotel Groups.

Amongst the various services that are being monitored is the centralised hot water Heat Pump system.

Immediately after we connected Guardian onto the heat pump, the system started reporting power interruption for less than 1 second twice a day.

Initially there was some concern but as the days worn on the notifications were ignored. Four weeks into the project the period that the heat pump power was off rapidly increased to 15 minute intervals.

Alarms bells went off and we contacted the hotel's management, even though they were receiving the notifications as well, advising them to look into the problem.

The heat pump company was called in to investigate the problem and found that the two water circulation pumps were labouring and required repairing. It turns out that one of the pipes had a partial blockage.

The repair cost was R6400.00. Had the pumps run on until they failed the result would have been far more costly, replacing the pumps, loss of income with guest demanding discounts.

As a result of this problem we are going to develop a module which will monitor the frequency of alarms and if there is an increase in the frequency or the duration of the alarm being on an automatic notification will be sent out.

You will be able to set the parameters, including switch the module on and off. 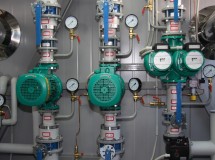